The development of LED Lightbars 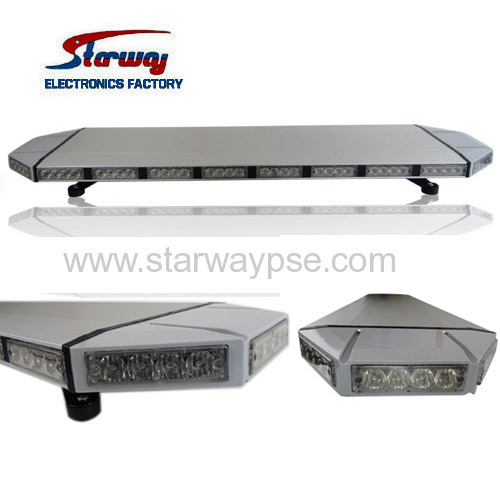 Initial period, these referred to a simple metal lightbar on the roof of the vehicle upon which agencies would mount two rotating beacons, as well as other components such as sirens and stationary "lollipop"  lights.

Soon the beacons manufacturers began producing off the shelf complete "LED lightbars".
Later, the individual components of the lightbar were integrated into a single contiguous unit, with two elongated domes on either side of a siren enclosure. The extended domes allowed for more rotating beacons, additional mirrors, and fixed-beam lights toward the center to replace the "lollipops".
Now, Lightbars may contain fixed, rotating, strobe, or LED-based lights in various configurations and offering programmable flash patterns. They may include a second, lower, tier of lamps, such as clear halogen "takedown" lights towards the front to illuminate the vehicle being stopped, clear side-facing "alley" spotlights, additional amber or red towards the rear for scene protection, or directional traffic advisory arrows.

The modern trend of locating sirens on or near the front bumper of emergency vehicles has resulted in many lightbar models eliminating the siren housing in lieu of more lighting.

Previous:   Police Sirens and Speakers for Next:  When need to replace the new P